Red Carpet Rolls Out October 11 for the Chesapeake Film Festival

The excitement begins Thursday, October 11 at the Academy Art Museum in Easton with Whet Your Appetite as Festival attendees partake of scrumptious appetizers and desserts prepared by seven area restaurants: Gourmet by the Bay, The Wylder Hotel, Stars Restaurant from the Inn at Perry Cabin, Limoncello Italian Restaurant and Wine Bar, The Bistro St. Michaels, Flying Fork Catering, and Scossa Restaurant and Lounge. (Thursday, October 11 at the Academy Art Museum 5 p.m.) 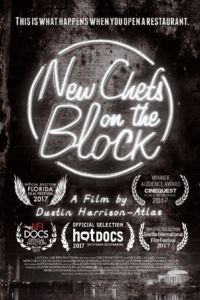 While the reception whets appetites for food, it also whets appetites for the opening night film at the Avalon Theatre, New Chefs on the Block, directed by Dustin Harrison-Atlas.   Two chefs in Washington, DC struggle to open and maintain their first restaurants. Against all odds, one becomes Bon Appetit Magazine’s Best New Restaurant in America. The other is forced to redefine success.  The film stars Aaron Silverman of Rose’s Luxury and Frank Linn of Frankly…Pizza; and the director Dustin Harrison-Atlas are expected to be in attendance at the Opening Night events. There are cameos by legendary chefs and restaurateurs Danny Meyer, Mike Isabella, and Michel Richard, and Washington Post food writer Tim Carman. (Thursday, October 11 at the Avalon Theatre 7:30 p.m.)

The Festival continues at the Avalon Theatre on Friday, October 12, with a mix of three incredible and distinctive films.  The evening begins with a journey Into the Okavango, a river basin that covers 125,000 square miles across Angola, Botswana and Namibia.  Directed by National Geographic Society filmmaker Neil Gelinas, the film features stunning wildlife photography and aerial views of rarely seen vistas. Into the Okavango draws attention to an endangered wilderness while it mesmerizes viewers with its beauty. (Friday, October 12 at the Avalon Theatre 5:00 p.m.)

From African elephants in the wild, the Festival moves to the story of Old Bet, the first circus elephant in America, as sung by her friend, an old farm dog. The Elephant’s Song is portrayed in colorful, handcrafted animation created frame-by-frame with clay-on-glass by Lynn Tomlinson, an acclaimed animator and Towson University professor. A wine and cheese reception follows. (Friday, October 12 at the Avalon Theatre 7:15 p.m.; Sunday, October 14 at the Cambridge Premier Cinemas 3:00 p.m.)

Friday night, In the Executioner’s Shadow casts a penetrating look at the consequences of the death penalty through three powerful stories: the rare perspective of a former state executioner who comes within days of executing an innocent person; a Boston Marathon bombing victim who struggles to define justice; and the Maryland parents of a murder victim who choose to fight for the life of their daughter’s killer.  Directed by Maggie Stogner, In the Executioner’s Shadow illuminates the oft-hidden realities entangled in death row, the death penalty, and the U.S. Justice system at large. (Friday, October 12 at the Avalon Theatre 8 p.m.; Saturday, October 13 at the Cambridge Premier Cinemas 1:00 p.m.)

On Saturday, October 13, the Chesapeake Film Festival expands to five venues: The Avalon Theatre and Academy Art Museum in Easton, The Dorchester Center for the Arts and Cambridge Premier Cinemas in Cambridge, and the Chesapeake Bay Maritime Museum in St. Michaels. 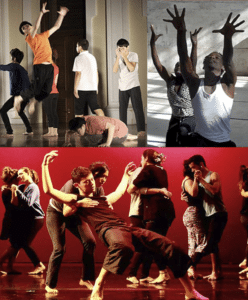 Festival participants will have three opportunities to see the Maryland premiere of the magical Moving Stories about six New York dancers who travel the world to work with youth who have experienced war, poverty, sexual exploitation, extreme prejudice and severe trauma as refugees. This motivational documentary by Wilderness Films shows how dance has the soft power to support children hurt by political and social failures.  (Saturday, October 13 at the Avalon Theatre 4:30 p.m. and Dorchester Center for the Arts 5:30 p.m.; Sunday, October 14 at the Academy Art Museum 1:00 p.m.)

Two other Maryland premieres screen in Easton and Cambridge.  The Gardener, directed by Sebastien Chabot, is a luscious summer-time tour of one of the great private gardens of the world: Frank Cabot’s 20-acre Quatre Vents in Quebec. The film is as much about the gardener as the garden as Cabot, who died in 2011, appears in archival footage to share his quest for perfection. (Saturday, October 13 at the Avalon Theatre at 2:45 p.m. and Dorchester Center for the Arts 8:00 p.m.) 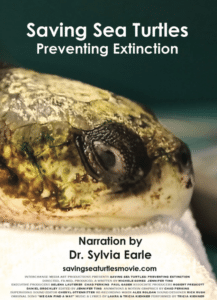 Saving Sea Turtles: Preventing Extinction is narrated by renowned marine scientist Dr. Sylvia Earle.  This inspiring documentary about the world’s rarest sea turtle, the Kemp’s Ridley, explains how humans pushed a healthy population to the precipice of extinction, and how humans now are slowly helping it recover. (Saturday, October 13 at the Avalon Theatre 1:00 p.m. and Sunday, October 14 at the Cambridge Premier Cinemas 5:00 p.m.)

Cinephiles will delight in the Maryland premiere of Searching for Ingmar Bergman. Considered one of the most important filmmakers of all time, Bergman would have turned 100 years old this year.  To commemorate his life, internationally known German director Margarethe von Trotta looks at the man and his work in a powerful new film. Actress Liv Ullman, Bergman’s lover who starred in 10 of his films and directed two of his screenplays shares personal stories.  (Saturday, October 13 at the Avalon Theatre 7:30 p.m.  An International Red-Carpet Reception precedes the film at 6:45 p.m.) Following this exciting feature presentation, Ben Simons, director of the Academy Art Musuem and Anke Van Wagenberg, senior curator will join Cornelia Ravenal and Mikael Sodersten, co-producers of Moving Stories for a panel discussion. 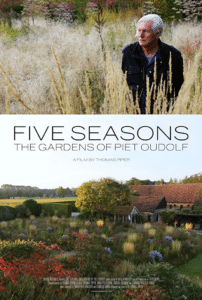 The Five Seasons: The Gardens of Piet Oudolf, directed by Tom Piper, is a gorgeous, meditative documentary that immerses the viewer in the art of a revolutionary landscape designer. (Saturday, October 13 at 3:30 p.m. and Sunday, October 14 at Academy Art Museum 4:45 p.m.)

First time filmmaker, Rudy Valdez, tells the very personal story of his sister, Cindy Shank, and the consequences of her tangential involvement with a Michigan drug ring.  The Sentence offers an intimate look into the agony of serving a harsh mandatory minimum sentence by someone who just happened to be in love with the wrong person at the wrong time.  (Saturday, October 13 at the Dorchester Center for the Arts 3:30 p.m.)

Millions of people know the music from The West Wing, Wonder Years and thirtysomething, yet few know the journey, hardships and triumphs of the composer of those familiar songs. Infused with the music of W.G. Snuffy Walden, Up to Snuff features luminaries from television, film and music who share personal stories, laughs and insights about this generous soul who overcame the excesses of rock and roll to find success in television.  (Saturday, October 13 at the Cambridge Premier Cinemas 2:30 p.m.) 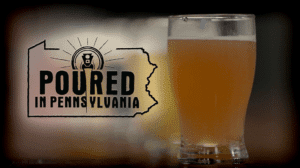 Beer lovers will savor a double feature on Saturday afternoon.  The Local Oyster Stout, an 8-minute film directed by Mark Burchick, tells the story of a collaboration between an oyster farmer, a shucker, and a brewery to create Maryland’s first farm-to-table Oyster Stout beer. Poured in Pennsylvania, a feature-length film directed by Nate Kresge, captures the history of the beer industry in the Keystone state.  It also shows how beer has created opportunities for hop farmers, maltsters, and keg manufacturers. (Saturday, October 13 at the Cambridge Premier Cinemas 4:15 p.m.)

Five Days in August, directed by Nick Ruff, follows two teams competing in the world’s largest and richest billfish tournament, the White Marlin Open out of Ocean City, MD.  With a total of 353 boats battling for an unprecedented $4.9 million, the stakes couldn’t be higher. For these fisherman, everything is literally on the line.  (Saturday, October 13 at the Cambridge Premier Cinemas 7:00 p.m.)

Saturday at the Chesapeake Bay Maritime Museum is a day devoted to outstanding environmental films of regional interest. An hour of environmental shorts at 1:00 leads an impressive line-up of five diverse films, including three East Coast premieres. 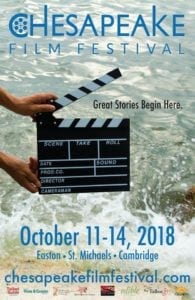 Tidewater and Current Revolution were directed by Roger Sorkin of the non-profit American Resilience Project, an organization whose impact campaigns help shape the narrative for practical solutions to our environmental problems.  Tidewater presents a frightening look at the Hampton Roads area of Virginia, an area with 14 military installations that are extremely vulnerable to sea level rise. Current Revolution tackles the challenges of modernizing our aging power grid to make it more secure and environmentally friendly and accelerating the transition to electric vehicles.  (Saturday, October 13 at the Chesapeake Bay Maritime Museum 2:45 p.m.)

Restoring the Clearwater, directed by Jon Bowermaster, and Edna E. Lockwood: Bottoms Up!, directed by local filmmaker Sandy Cannon-Brown, follow the restoration of two historic vessels with educational missions.  The sloop Clearwater was built to save New York’s Hudson River under the visionary leadership of musician/activist Pete Seeger. Edna E. Lockwood was the last bugeye to work the Chesapeake Bay.  After a three-year replacement of her log hull, the 1889 bugeye will be back on the Chesapeake Bay to share the history, culture and traditions of watermen and their boats. Edna will officially relaunch during OysterFest 2018 at the museum, two weeks after her story debuts at the Chesapeake Film Festival. (Saturday, October 13 at the Chesapeake Bay Maritime Museum 4:45 p.m.)

The premiere of An Island Out of Time, by Tom Horton, Dave Harp and Sandy Cannon-Brown, is about an amazing couple, Mary Ada and Dwight Marshall, and about Smith Island where their family roots go back 400 years. Written by Tom Horton, the film – like his 1996 book, An Island Out of Time, is both celebration and elegy for a place beset with erosion, vanishing populations, and limited economic opportunities.  (Saturday, October 13 at the Chesapeake Bay Maritime Museum 7:30 p.m.)

The Chesapeake Film Festival continues on Sunday, October 14 at the Avalon Theatre and Academy Art Museum in Easton and the Cambridge Premier Cinemas in Cambridge.

I, Matter is a feature-length docu-drama shot entirely on an iPhone by its writer and co-director Llysa Rie Lesaka and Shayne Pax. Llysa Rie as Gabbi Jones, tells the devastating and difficult story of living with HIV. (Sunday, October 14 at the Avalon Theatre 1:00 p.m.)

I, Matter is paired with a narrative short, Riverment, directed by emerging filmmaker Shayla Racquel, about a former civil rights activist who fears for the safety of her granddaughter who is determined to follow in her footsteps. (Sunday, October 14 at the Avalon Theatre 2:30 p.m.)

Voices/Peace, about Muslim, Christian and Jewish teens from the Jerusalem and the West Bank, and Boko Haram: Journey from Evil, about Nigerians overcoming a decade of conflict, create a poignant double feature by two award-winning directors: Amy DeLouise and Beth Mendelson, respectively. (Sunday, October 14 at the Avalon Theatre 3:15 p.m.) 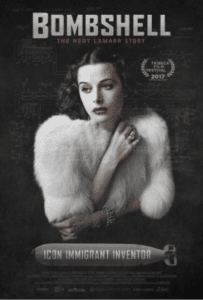 The closing film of the Chesapeake Film Festival proves that fact can be stranger than fiction. Bombshell: The Hedy Lamarr Story, directed by Alexandra Dean, is about Hedy Lamarr, the beautiful Hollywood actress of the 1930s and 40s. At night, after shooting her scenes on set, Lamarr works on a secret radio system that will allow the Allies to torpedo Nazi U-boats with deadly accuracy.  A chance encounter with an eccentric composer, George Antheil, enables her to transform her sketches into a brilliant technology that ultimately contributes to the security of wi-fi, GPS and Bluetooth.  (Sunday, October 14 at the Avalon Theatre 5:00 p.m.)

The Chesapeake Film Festival calls it a wrap with a ticketed reception and awards ceremony. (Sunday, October 14 at the Avalon Theatre 7:00 p.m.)

The films and events listed above are only part of the total Chesapeake Film Festival experience. The Festival also features several programs of exceptional short films, and most screenings are followed by panel discussions and/or question-and-answers with the filmmakers and experts on the topic at hand. For a complete schedule and ticket information, visit chesapeakefilmfestival.com. Schedule subject to change.